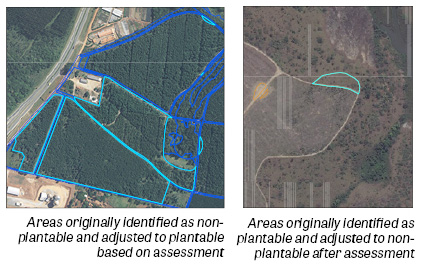 In support of international due diligence as part of a 200,000 hectare land acquisition in south central Brazil, Mason, Bruce & Girard, Inc. (MB&G) validated data quality including forest type acreage. MB&G acquired RapidEye satellite imagery and publicly available high-resolution imagery to perform a high-level audit of the current owner’s existing data. This enabled MB&G to report changes in plantable and natural area hectares, and confirm within 20 days of image acquisition, that they were accurately represented.   The project area ranged from Mato Grosso do Sul to the Atlantic Coast and from Minas Gerais to Sao Paulo. 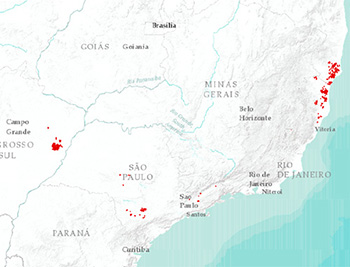 MB&G used a remote sensing approach for modeling the relationship between image spectral response and plantable versus non-plantable areas. RapidEye imagery (vintage May-October 2013) was selected for the initial “coarse filter” remote sensing analysis due to its available archive, 12-bit depth (versus often 11-bit or even 8-bit depth), which is critical for shadow penetration, as well as its inclusion of a red edge band. ECognition was used to segment the image and flag areas with spectral signatures that did not align with the dataset’s plantable/non-plantable and natural area attributes. These flagged areas were visually reviewed to confirm their appropriate label.

The second component of the project was to assess the cause and severity of plantable and natural area “outliers.” Initially high-resolution imagery was expected to be available for the project area, however, it was found that this was lacking for a significant portion of the area. Publicly available imagery was available for the entire area and was of a high enough quality, including both spatial and temporal resolution, to be used in its place.

MB&G developed metrics, graphs, and a final report to aid in quantifying how net change in “outlier” hectares was distributed across the landscape and among stands. MB&G also provided a secondary assessment of areas identified as plantable but with land-use categories that suggested questionable plantability, such as areas under lease to third parties.