Following a large land acquisition project, MB&G was contracted to validate and update the spatial location of the existing stands dataset to match newly acquired and orthorectified 50 cm Pleiades base imagery. Image segmentation was used to divide the Pleiades imagery into spectrally similar polygons (stands), as shown in the image to the right with red lines. Those segments were then compared to the original stand boundaries (shown in blue) in an automated approach to develop final, spatially-updated, stand boundaries (shown in orange). 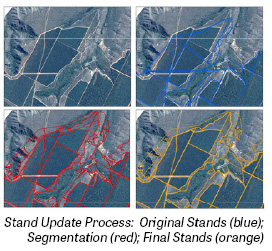 While final stand boundaries with updated labels was the only contracted deliverable, our team also provided the segmented dataset as a value added service. This extra dataset identified stand anomalies, such as unsuccessful regrowth or stand mortality.